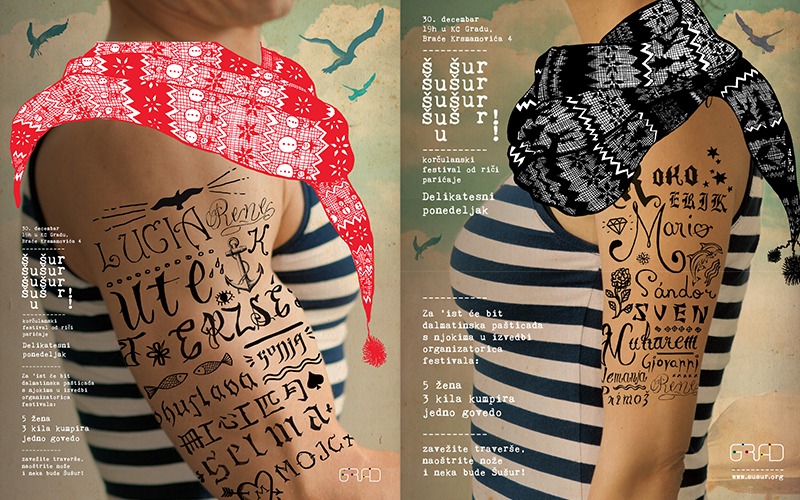 In the last glimpse of the year 2013, together with partners from Croatia, with association Kulturna Akcija KULA, BLOCKFREI is co-producing a winter edition of Šušur! Festival of words 2013 in Belgrade. This summer event dedicated to literature is going to be presented as a part of regular gastronomic and cultural program of the Cultural center GRAD under the name Deli Monday.

The event will feature three Croatian authors, Marko Pogačar, Igor Štiks and Srećko Horvat, on which occasion the newly published book Jugoton is burning! is going to be presented by its author, Marko Pogačar.

This collection of personal essays on music that marked one generation brought together these three authors who are connected not only through their writings but also through their activism. Shortly after the beginning of attainable conversation on literature with the organizers of the Festival, the literary trio will engage in a dynamic verbal dribbling on different topics that connect them impressed all gathered lovers of written word and sharp humor.

With over 300 portions of traditional Korčula dishes Pašticada and Klašuni, as well as sounds from the musical laboratory of DJ Evox and Tamarinsky, we are inviting all lovers of a well-written word, sharp humor and good music and dalmatian cuisine, to join us and experience Šušur! firsthand.

More About ŠUŠUR! Festival of Words:

ŠUŠUR! Festival of Words is a literary festival conceived in 2012 by Kulturna akcija – KULA, association from Croatia, in partnership with BLOCKFREI with the aim to fill in the cultural their diaspora by using contemporary cultural production and innovative approach. (...)

The festival creates a dialogue between cultural representatives from the former Yugoslav countries, local community and wider audience. The Festival takes place every August in Korčula (Croatia) and it hosts authors from Serbia, Bosnia & Herzegovina, Macedonia, Montenegro as well as local authors in an attempt to offer a platform for cultural exchange and networking, including the local community as its vital part.

Every edition of the Festival is curated around a specific theme related to the life of the island (discussions about socio-political aspect of intellectual migration and nomadism, analysis of the concept of islomania, talks on traveling writings as a literary category, views on the phenomenon of “summer readings”, romance novels and noir stories through a perception of regional and local authors, etc. ) and consists of the evening literary program, readings and round table talks held in an open public space. A series of hands-on multilingual workshops (“photography workshop”, “word hunt – workshop about local dialect”, “hand made paper”, etc.) have been organized as side events, for the local audience as well as for visitors of the island of all languages and generations.

With this project, BLOCKFREI wants to contribute to the higher cooperation among civil sector in the region of former Yugoslavia and its diaspora and enable a platform for multicultural exchange. ŠUŠUR! Festival of Words so far was supported by the Ministry of Culture of the Republic of Croatia, the City of Korčula and TRADUKI.