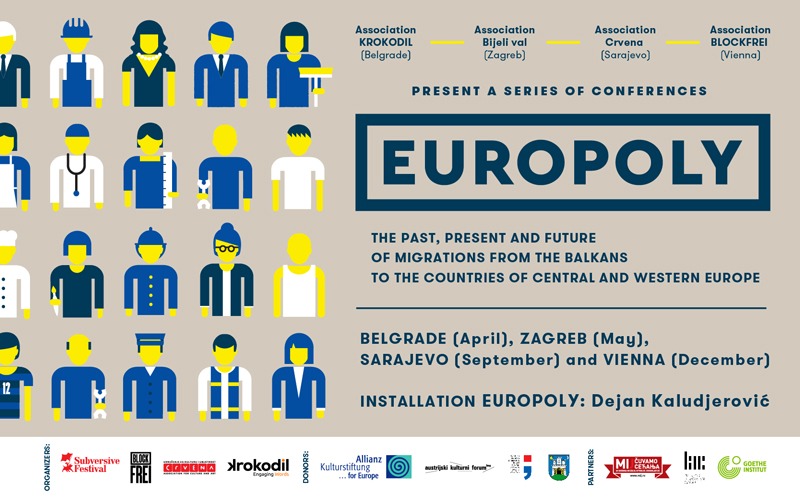 Past, Present and Future of Migrations from the Balkans to the Countries of Central and Western Europe

EUROPOLY is a multidisciplinary project that tackles the important issue of migrations from the Balkan region to the countries of Central and Western Europe, starting from the huge influx of economic migrants (so-called Gastarbeiters) in the 1960’s, over to refugees and brain drain caused by Yugoslav conflicts of the 1990’s, to the most recent refugee crisis.
The mission of the series of regional conferences EUROPOLY is to explore and map the rich social, cultural and artistic impact that this long-drawn-out migratory wave has left on the region of the Western Balkans and the countries that are most often migrants’ final destinations. Emigration and dislocation from the country of origin often raise many questions, such as the question of return, belonging and as well as what are the consequences that this process leaves on one’s identity.

The project is developed by four regional partner organizations working in different fields:

The conferences will take place in 2017, in Belgrade (April), Zagreb (May), Sarajevo (September) and Vienna (December). Each conference will be a series of two-day events that would include round-table discussions, readings, film projections, exhibitions, as well as a wide array of artists, writers, theoreticians, curators and film directors.

Main topics of the conference:

EUROPOLY conceptually relies on the art project Europoly – The European Union Identity Trading Game by artist Dejan Kaludjerović.
Created in the form of industrial product of a social game inspired by Monopoly, this work is questioning the position of immigrants in the EU, the very idea of the EU, as well as the gap between the ideal and the practical. Non-EU citizens working in the EU have been photographed and presented in Europoly through their professions. Luck, to a great extent, determines the possible rise or fall of the ‘players’ who wish to become part of the EU and acquire new European identity.
The European Union defines European identity as something that is provided only within the Union and only to the European Union citizens, although Europe does not end at the borders of the Union. However, the EU does have the huge power to define European identity, to set up the rules of the game others have to join. The consumer society of the European Union has created a rule that ‘everything is for sale’, including even the notions of our identities.

Europoly – The European Union Identity Trading Game installation will be presented in the scope of each conference.