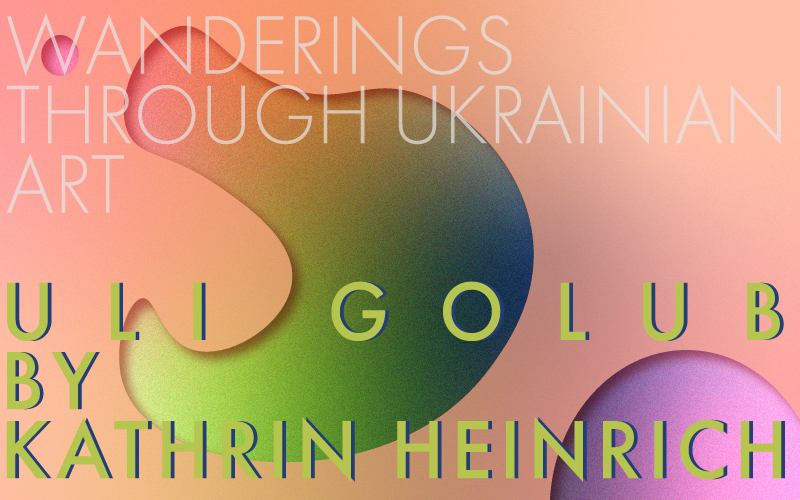 Driven by the pandemic experience, artist and filmmaker Uli Golub turns to fitness and social media as modern means of storytelling and community-building 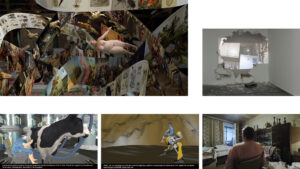 “I dream of wind cradling the heavy and whippy spikes of wheat, of endless fields, the limitless sky, the low clouds moving slowly above my head.” Floating weightless through space, the protagonist of Uli Golub’s short film Babushka in Space (2017) ponders the loss of earthly delights, watching the blue planet from her extraterrestrial exile. Based on a script written with her grandmother Nadja, the film considers the loneliness of the elderly, trapped inside their apartments by ailments, like astronauts on a space station. Its fusion of documentary film material, digital animation, and speculative fiction narrated by voice-over is characteristic for her practice, which the Ukrainian artist and filmmaker calls “in essence text-based.”

In some of her works, texts of news media meet digital algorithms and game aesthetics, as in Algorithmic Family (2018), while others update classic literary material with 21st century dystopic themes of ecological catastrophes and perpetual media coverage, like Notes from Underground (2016). She purposely plays with the crudity of animation – rough edges and low resolution – in a nod to Hito Steyerl’s concept of the poor image; the blurred, the discarded, the circulated. In short, the image that mirrors reality through its very conditions of existence.

“I’m kind of a work in progress myself,” describes the artist her practice in a Zoom call from the San Francisco Bay Area, where she is currently based. “As I’ve been traveling and moving a lot from country to country, I have this necessity to reinvent myself all the time. It’s challenging, but I’m used to it.” While Golub can adapt quickly, she likes to loop back to older works to reevaluate, saying: “If you would visualize my process and my growth, it would look like a spiral. So, I’m evolving, but I’m still returning to some points, rethinking what everything means.” 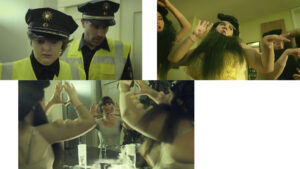 Works like Babushka in Space or Notes from Underground have gained new significance during the pandemic and seem prescient in their consideration of human life forced indoors by catastrophe. Yet, it marked a personal turning point for Golub that has given her artistic practice a new direction towards collaboration and community-building: “My grandmother passed away in 2020, which was a huge blow for me, and I got a little depressed. During the quarantine I had this very weird period; I decided that I would not be doing art for a while. Instead, I focused on fitness – I’m a licensed instructor. But, again in a spiral movement, I came back to a place where I’m now comfortable to go on with my artistic practice.”

The experience of overcoming such a profound crisis motivated her to try to help others. Having herself struggled to find a role model, “somebody who would inspire me to move on in dark times,” the question of how to take on such a role of support through her artistic work for younger women has become one of her central concerns:

“I’m trying to figure out who I’m speaking to, how my work could be more accessible and relatable. I want to create works specifically for young women who are trying to figure out who they are, what they want to do with their lives, where their place is in the world, and inspire them to overcome whatever obstacles they have in their lives and to grow into who they are meant to be. To become their unapologetic self.”

Golub is thus looking to utilize social media and mass culture rather than the traditional means of the art-world bubble. An avid user of Instagram herself, she is keen to explore TikTok to reach a younger audience for her filmic work but is also interested in other digital advancements, like NFTs, and the financial possibilities they open up for artists, as she herself is no stranger to the artist’s balancing act between survival and commercialization and its stigma.

After obtaining an M.A. in philology in her hometown of Kharkiv, Ukraine, Golub studied at the Rodchenko Art School in Moscow. There, she remembers being told by her teacher that her collages titled #REPOST – a series dealing with a facial-recognition algorithm and its failings that led to erroneous arrests in Russia – looked like commercial art, “like it was a bad thing.” She considers this view limiting, politically but also in terms of everyday expenses that need to be paid, poignantly summarizing that “being an artist doesn’t mean you’re not human.”

That Uli Golub calls her current artistic reinvention a “rebranding” is thus not exactly a coincidence but shows how she embraces the stateside can-do mentality: “Here, you have this idea or illusion that you can be whoever you want to be – and nobody has the right to judge you. I don’t know if it’s true but at least it’s here.” 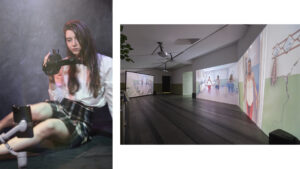 While her day job of teaching Pilates pays the bills, she also plans to incorporate it in her artistic work at some point, as she considers the workout a community-building practice as well as a narrative journey through which she as instructor guides the participants, much like a storyteller an audience. “For me, inspiration is a shared narrative, a story that tells of how somebody did it, transformed, overcame an obstacle and became something new.”

If Golub’s explicit intention to inspire may occasionally sound reminiscent of capitalist motivational speak, her latest short film Look, She’s Got Beard (2019–2020) proves that commercial viability and criticality don’t have to be mutually exclusive. Living up to its denomination, the “experimental sci-fi eco-feminist short thriller-comedy film” chronicles the encounter of a heteronormative couple and an alien species that descends upon their apartment seeking refuge.

Drawing on the trope of the bearded lady, the short film explores different ways of approaching the Other, thus broaching issues of migration policy, the future of immigration, and police violence by undercutting the cool, desaturated, high-definition vibe of a Volkswagen ad with an over-the-top, lustful surrealism, tinges of opera, and a vaudevillian air of exaggeration. It was awarded the special prize of the prestigious PinchukArtCentre prize in 2020.

A plethora of new projects is underway, and with each of them Uli Golub is in some way advancing aspects of earlier works, while looking to empower and collaborate. If Look, She’s got Beard introduced opera singing into her filmic oeuvre, a new script is set to push the concept further by styling a story of the turbulent relationship of a woman and a Borscht – yes, the soup – as a Bollywood musical. Two other projects deal with female figures both contemporary and historic: A documentary about a female stem-cell microbiologist who works on infectious diseases is in the making, as is a project about the American avant-garde filmmaker and dancer Maya Deren, who was born Eleanora Solomonovna Derenkovskaya in Kyiv in 1917.

But while some such Ukrainian references may pop up in current works, Golub has shifted away from her earlier focus on Ukraine towards a more universal approach, in this case exploring Deren’s cinematic language through the lens of femininity. “We are talking about further developing her cinematic language, which is less narrative, more visual, fluid, and intuitive. It’s quite challenging for me,” explains Golub. She envisions these reenactments as short, TikTok-style videos, fusing a strategy of contemporary art that critically deals with history with the digital platform’s signature remix-culture – in the hope of inspiring some of its millions of users.