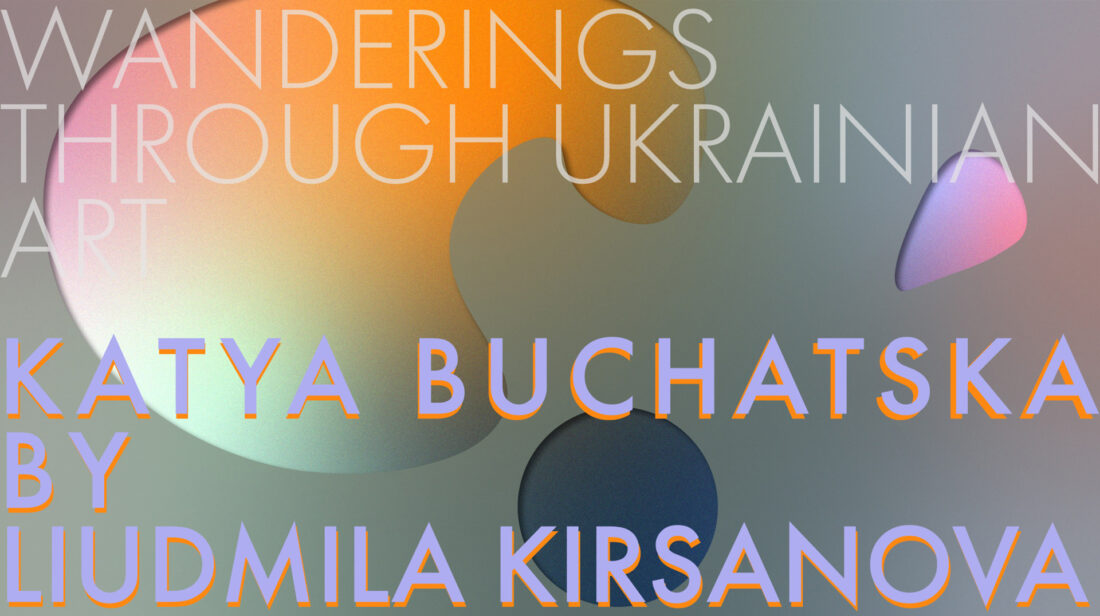 Abandoning direct political messages, loud manifestos and strong statements, Katya Buchatska is developing an art practice of ‘small gestures’ that never challenges a problem openly whereas uncovers and exposes its concealed seams and corners. Buchatska acts like an archaeologist and approaches her subject of research as a complex multi-layered situation — she brushes off the coatings, cleans away the build-ups to reveal the underneath layers —yet shimmering through, they  tell a new story. Nevertheless the discovered artefacts could be very intimate, excavated from within — as there  the artist is sharing her personal experience, speaks about traumas fossilised and preserved in cultural layers. 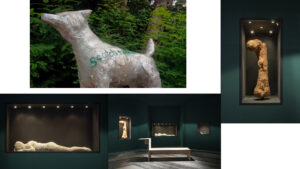 The installation Pain Record (2020), exhibited in PinchukArtCentre, was built upon mockumentary storytelling and set up in a form of an archaeological display. In a dark room, under the spotlights, there were three vitrines showcasing a massive dinosaur’s bone, gypsum cast of paleontologist William Falconer and his handwritten diary. The narrative was unfolding around the mysterious death of the scientist, who was believed to commit a suicide in a Pompeian way — by throwing himself into a hot ash expelled during the volcanic eruption. Burned the body entirely, it had solidified the negative form which, later cast, delivered the face-down figure, now exhibited between the ‘Edinburg specimen’ and the penned-down anguish. Inspired with the residency in Scotland and deeply touched by her friend’s depression, Buchatska created a poignant story of an imagined researcher from the 19th century whose interest in pre-human animals intertwined with a personal tragedy, and who themself became a museum piece along with their archaeological finding. The diary was filled with reflections upon male dominance, hierarchies and structure of power. There, social met anatomical, collective met personal, while the author was expanding on the need of self-punishment, self-carving-out for a better future. Despite strong political context, I would speculate about Falconer’s mental despair, amidst the excavations, more as a total human problem than gender-related institutional crisis. This project could arouse a strange nihilistic curiosity: What if the whole history evolved differently and never produced a human being, human society —the ultimate scenario to exclude human sufferings completely. In this way, to my mind, the dinosaur’s fragment embodied a dream of non-existence and simultaneously awareness of inevitable finale for as an individual and species. In Pain Record, the very fossil research epitomized a practice of self-archaeology, when the most radical Other, distanced one million years away — a dinosaur — could have become a potential counterpart to refer to in one’s inner struggle.

It might be debatable, however, I cannot but refer here to Ana Mendieta’s earth-body sculptures. And the potential relationship is more than just formal. Obviously, Mendieta was developing a different approach to art making tapped into mysterious knowledge and ritual. Yet her sculptures, merged with natural surroundings and appearing to genuinely belong with them, have an important message to share with Pain Record. In both projects, the human body — uprooted, isolated — is returned to an ancient moment when it regains spiritual and material integrity and becomes a piece of art. Buchatska does it in a form of a museum situation, which Mendieta would have never tolerated, nevertheless they come together in interpreting the liberation of belonging to something more than present and create body traces indicating a performative act of transformation. 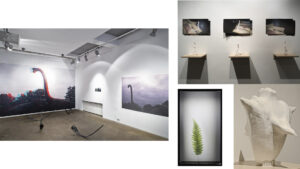 Buchatska’s interest in the pre-Holocene era and particularly in dinosaurs stems from reflection and imagining of a non-human environment. Massively exploited in popular culture, the dinosaurs have been converted into entertainment — from tiny plastic memorabilia to life-size copies in amusement parks. Influenced and fascinated by that, the artist expands on commercialised extinct species as the radical Other — those inhabited the world not known to human and mysteriously disappeared, providing the place for a new life spin. For the exhibition Photographs from the Past Year (2019) in Mala Gallery (Kyiv), Katya Buchatska made large prints of her spontaneous shooting at the Dinosaurs Exhibition in Kyiv —real-scale models, captured as if they were alive, against a background of dramatic sky. Next to the anaglyph images, the artist displayed ‘the living fossils’ or entities that hadn’t changed much from their original form and thus connected with pre-human times: Fern and palm leaves, water caltrop fruit and mistletoe branches — all transformed or recreated — occupied the space. Among them, there were speakers broadcasting cosmic noise, which was considered by some scientists to be a relic of the Big Bang. Accumulating these before-human but everyday things in one space, Buchatska sought to expose the fold of the time fabric where its distant sides suddenly met and produced a new vision and experience.

Photographs from the Past Year made simple objects communicate the idea of powerful matter that was in constant creative process of generating new forms and devouring their ancestors. Referencing Jane Bennet’s concept of vibrant matter, it could be described as the artist manifested the agency of matter, its enormous resources and drive for transformation, through observing the wonderful things conceived much prior to human being. Upscaled and 3D-printed water caltrop fruit appeared like an alien multi-tongued shape, combining both organic body and sculptural finesse. Rendered in black resin, curved palm leaves proved to be minimalistic abstract figures and simultaneously plant fragments. Cast in white acryl, mistletoe branches were displayed together with manuals for Photoshop cutting-out techniques and so revealed their graphic nature of complex broken lines. Buchatska did her archaeological research in a comparative method by looking for artistic qualities in different species and recreating them with new technologies. It yielded a dream-like show with blurred boundaries between phenomena. I believe, in this fold of ancient and contemporary, she was looking for a way to embrace the synthesis of vital matter (which will never cease to evolve) and emerging technologies (which will be continuously developing either). 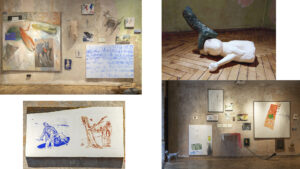 Above all, Buchatska is also an archaeologist within her own artistic and private archives. A Very Personal Show (2020) at The Naked Room (Kyiv) demonstrated a reflective ‘inventory’ of her own body of work. Organised like a museum storage or collection vitrine, the exhibition brought together paintings, drawings, sculptures, lenticular images and sketches that covered the walls from floor to ceiling and made the spectators move actively to explore the pieces. Again, like for the Pain Record project, the artist engaged a museum display arrangement to share a personal story. The conflict of the public layout and personal insight stressed two important issues — it revealed a new potential for a display situation to become a personal board and way of therapeutic experience for assembling individual thoughts and objects, and on the other side, it spoke about the very transformation of the idea of a museum vitrine, transcending anonymous presentation mode and shifting towards representation of manifold stories told my diverse voices.

Among the sculptures, exhibited at A Very Personal Show, there were several covered with levkas — a technique borrowed from the field of icon and fresco making which is extremely rare in contemporary art. Mixed from natural components, levkas provides a special white colour with a full body to it. Initially trained in mural painting, Buchatska has adopted this method which ‘elevates’ the objects, indeed providing them with sacred references. This unusual incorporation of an old priming into her art practice made me think again of Ana Mendieta, who was, although dealing with prehistoric cosmologies, involved in their art tradition too.

While writing this text, I have been contemplating the ambiguous relation I am trying to build between these two artists. The problem is, at the first glance, they research completely opposite things — for Mendieta it is all that belongs with the human body, for Buchatska — on the contrary, everything that is non-human. Yet, despite delving into object-oriented ontology and new materialism, Buchatska’s projects are still very much about personal feelings and experiences where non-human entities become rather mediators for the internal world of a person and way of its understanding. In some artworks, like Pain Record, the spectators almost sensate the dramatic conflict within and perceive the dinosaur’s remnant as if it were a massive, solidified despair. Or like in Photographs from the Past Year where resin reptile models embody intensity of solitude and alienation. Overall, in Buchatska’s and Mendieta’s art, there is an intention to find a way how human, with their body and mind, can be reintegrated into the communality of species and inanimate things.

As an epilogue. Since 2016 Katya Buchatska, has been developing the documentary photo series of her site-specific interventions, called Lazy Land Art, and annually participating in land art symposium in the village of Mohrytsia, but this practice, unfortunately, is side-lined from her main activities. However, I believe there is a big potential in connecting the artist’s interest in the pre-Holocene era, archaeological approach, endeavor to understand the place and relevance of human experience within a new epoch approaching together with her work in-situ and experiments with various natural materials. And here, the dialogue with Ana Mendieta could definitely prove very fruitful.